Sunshine Coast Council has just released new flood mapping for the Sunshine Coast region. This mapping replaces the previous inaccurate mapping that was released a few years ago. The new mapping is available through the Council website using the following link:

We are pleased to see that Council has released the new mapping, as the previous maps were misleading because they were based on old aerial survey data. The old survey didn’t reflect construction of our northern lake system.

It’s also pleasing to see all residential lots in Pelican Waters above the 100 year flood level in the year 2100, particularly as the 2100 modelling includes full allowance for climate change. Obviously we design Pelican Waters to offer very high level of flood immunity but it’s nice to see it reflected in the latest modelling.

We have extracted an image from the Council mapping over the northern part of Pelican Waters to give you an idea of how it looks.

Please contact our office if you have any queries in regard to the mapping. 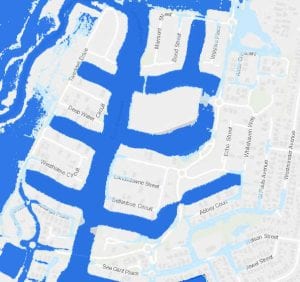