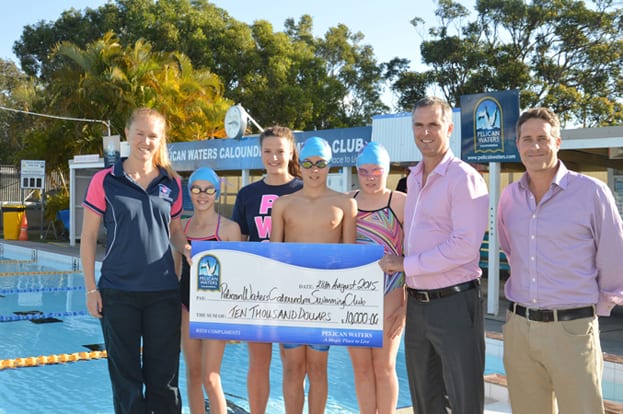 A cheque for $10,000 was handed over to the Pelican Waters Caloundra Swimming Club (PWC) on Friday, continuing one of the longest running club sponsorship arrangements in Queensland swimming.

PWC president Shelley Crosby thanked Pelican Waters for the ongoing support saying it had helped contribute to some amazing highlights for the club. She said the funds were used for camp subsidies and sponsorships, nomination fees, team clothing, transport to events, team barbecues, coaching fees, major equipment purchases and more.

Now with 179 members, Pelican Waters Caloundra Swimming Club (www.pwcsc.com.au) is the home of respected Olympic coach John Wallace, his daughter Tessa Wallace who has competed at the Olympics and Commonwealth Games, and a host of other rising stars who wear the Pelican Waters name proudly.

John Wallace was with the swimmers in the club who were competing at the State Short Course Championships in Chandler, Brisbane.