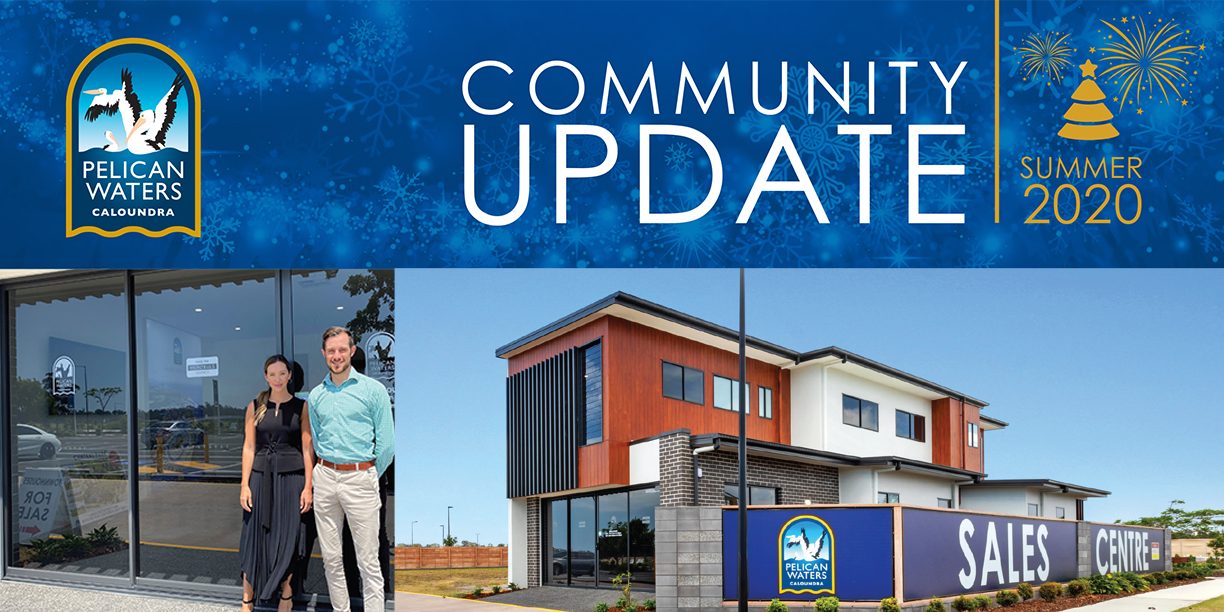 LOCALS OPTING FOR A LOW-MAINTENANCE LIFESTYLE IN THE COMMUNITY THEY KNOW AND LOVE ARE DRIVING INCREDIBLE DEMAND FOR OUR LATEST HOUSING CONCEPT, THE SIGNATURE TERRACE COLLECTION.

Just three opportunities remain for the upmarket terrace homes in the heart of the emerging island and marina precinct, following seven sales or contracts taken for a combined $4.14 million in recent weeks.

With a new display terrace home doubling as sales office now freshly completed on site, interest is only growing for the boutique collection.

The new Pelican Waters sales centre on the corner of Coral Sea Drive and Arlington Drive is now open adjoining the waterfront display village currently under construction. The sales centre is open Monday to Friday from 8:30am to 5pm and on weekends from 10am to 4pm.

We are already seeing plenty of foot traffic through the centre with lots of locals popping their heads in and the feedback has been really encouraging.

People are enjoying experiencing first-hand what the finished product looks like and they don’t want to miss out. The unique design features of these homes provide a new way of living in Pelican Waters and to see it is to believe it.

The vast majority of interest is coming from Pelican Waters or southern Sunshine Coast locals who have grown to love the community and are looking forward to a relaxed, low-maintenance lifestyle in familiar surrounds.

The remaining Signature Terraces for sale range from $710,000 to $745,000 and are all “Moffat” designs, offering dual living, a choice of three or four bedrooms, master bedrooms on both the lower and upper levels, three bathrooms, stone benchtops, 2.7m high ceilings, internal covered courtyard, stainless steel appliances and double garage.

Buyers can benefit from the flexibility of being able to reflect their own style with personalised designs and the $25,000 Home Builder Grant (Changes apply Dec 2020) for approved applicants giving a massive discount on a new home.

A shortage of residential property listings on the Sunshine Coast has led to an unprecedented land rush at Pelican Waters, where nine new lots have been snapped up in less than 24 hours for a combined $5 million-plus.

With the pandemic turbo-charging already strong appeal for the idyllic Queensland lifestyle, Pelican Waters has now sold out of all available land and is moving to release more product to market as soon as possible to meet demand.

The Park Central land release, a boutique collection of nine lots adjoining the future Central Park on the new island has sold out in less than a day and prior to public release. The buyers were mainly local, with several coming from Brisbane and interstate.

The consensus is that in Pelican Waters and the Sunshine Coast in general there is a real frenzy around building your own home. The housing market is very tight and people are sick of missing out so they are taking control and doing their own thing.

More land opportunities are on the horizon for early next year when Pelican Waters releases its next range of waterfront and dry lots.

February will mark the estate’s first major waterfront release in more than nine months, comprising approximately 18 sites ranging from 480sqm to 902sqm in size and water frontages up to 29 metres, with uninterrupted parkland and Bells Creek at the rear.

A dry release will follow in March, made up of a similar number of home sites from 400sqm to 650sqm in size, with waterview, park-facing and cul-de-sac product all in the mix.

Pricing for both releases are yet to be announced.

Don’t forget to contact Pelican Waters to register your interest for these upcoming land releases so you don’t miss out.

The opening date is drawing near for our eastern bridge linking the marina and shopping centre to Golden Beach residents via Michael Street and associated lock and weir system, representing a total infrastructure investment of more than $10.5 million.

There have been some setbacks due to coronavirus and our ability to source light poles from overseas, however we are confident Energex will be ready to flick the switch on the project in time for a February opening.

Watch this space for announcements on a small community event to mark this important Pelican Waters milestone, featuring a ‘bridge walk’ before cars are officially permitted, leading to the opening of the first stage of the Island’s 2.5ha Central Park.

The bridge is one of the major pieces of the puzzle, opening the island precinct, new marina and everything else Pelican Waters has to offer to residents from the Golden Beach side of the estate, through Michael Street and Anning Avenue for vehicles, cyclists and pedestrians.

It will also serve as a gateway entry to the Pelican Waters canal system through the lock for boats and other leisure craft.

Sunshine Coast Company Kennedy Property Group has been announced as the developer of the new waterfront marina village.

Pelican Waters is extremely happy to have Kennedy Property Group on board, a company we are confident can deliver the amenity everybody has been waiting for in Pelican Waters.

The project will include restaurants and cafes overlooking the marina, a standalone waterfront restaurant surrounded by parkland, retail shops and a medical hub featuring medical centre and allied health facilities such as pharmacy, physio, x-ray imaging and more.

Stand by for construction to commence around the same time as the neighbouring marina in June next year. All going to plan, the marina will be launching its first boats by the end of 2021, while the vibrant village hub will be fully functioning by mid-2022. New website coming soon.

Approval for the Marina Village is about to be lodged with council.

The marina will be complete with power, fresh water, fuel and an equipped chandlery open seven days a week. We will also operate a full service marina yard catering for all maintenance, detailing and repair work.

Dry boat storage is one of the fastest growing forms of boat storage in the world and a phone call is all it takes to have your boat launched, retrieved and placed into dry storage.

Strong enquiry is already flooding in for the 160 dry stack storage spaces for vessels up to 10m, and the 125 wet berths available for boats up to 15m in length.

To register your interest for a wet berth or a place in the stacker visit www.pelicanwatersmarina.com.au

BEST BUILDERS PUTTING ON A DISPLAY

Queensland’s best builders are showcasing their talents on the new island precinct, as the region’s only waterfront display village powers ahead.

Anyone interested in a customised, high end home tailored for the Pelican Waters lifestyle should drop in anytime to discuss these available opportunities.

All builders are well under way with their construction and the village featuring a walkable foreshore, seven waterfront homes, four dry lots and a collection of terrace product is on track for an April opening.